The Tamron 20mm f2.8 lens for Sony E mount cameras was announced back in November 2019 as part of a trio of prime lenses which share the same exterior design, construction, size, filter diameter and f stop. The other lens being the 24 and 35 mm. I reviewed the 35mm f2.8 back in June 2021 and was quite impressed with it.

The Tamron 20mm is pretty much the same design and build quality as the 24 and 35. They are all the same length and diameter. They all have the same filter diameter of 67mm. Weight wise the 20mm is the heaviest at 220g and the 35mm is the lightest at 210g. All three have the same magnification ratio of 1:2. So Tamron has worked very hard to ensure that uniformity is carried throughout this line of lenses. It will be interesting to see if they introduce longer lenses like an 85mm how they carry that out. When compared to my Canon EF 20mm f2.8  the Tamron is only a smidge smaller and lighter which is quite surprising as the Canon is a retrofocus design built to accommodate the larger lens flange distance of 44mm compared to the 18mm of the Sony.

The body is made out of some form of engineering plastic and the lens mount appears to be chrome plated brass which is nice. There is an “o” ring which provides some semblance of sealing from the elements at the mount. There is no other weather sealing and no indication as to the level of sealing and Tamron on their website just say that it has a “Moisture-Resistant Construction”. Tamron also claim that the front lens element has a fluorine coating which is dirt resistant. The only control on the lens is the ribbed focus ring which is of the fly-by-wire type and it has no hard stops or any form of tactile feedback when turning it. Bad news if you want to do manual video focus pulls. The lens comes with a petal shaped lens hood that bayonets into place. 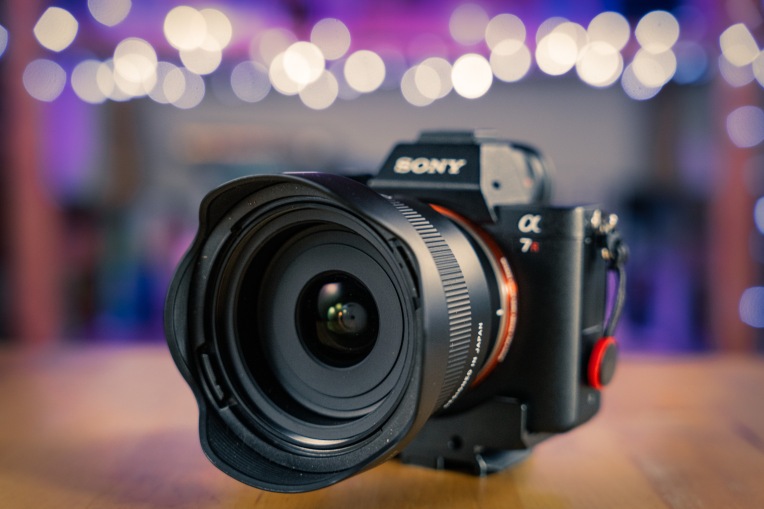 Tamron on their website say “The expert arrangement of the LD and GM specialised glass elements greatly controls aberrations, including chromatic aberrations. Tamron’s proprietary BBAR (Broad-Band Anti-Reflection) Coating reduces ghosting and flare, which can otherwise occur when taking a photo against the sun.” When shooting with the camera’s lens correction function enabled “it delivers, throughout the frame, high resolution performance that maximises the benefits of the latest high-megapixel cameras”. So let’s see how those claims stack up to real world usage.

Let’s deal with the whopping great elephant in the room. This lens has very profound barrel distortion, but for jpg shooters an inbuilt lens profile minimises the effect. For RAW shooters Adobe has made a lens profile available for Lightroom and Camera RAW.

When we look at the uncorrected image and look at the rulers on the bottom and the side we can see that it is 47.4 cm in width and 29.5 cm in height. Compare that to the corrected image which is 43.7cm by 28.3cm. So in percentage terms that is a 7.2% reduction in width and a 4.2% reduction in height. This means that with the lens profile applied the lens effectively becomes a 22mm. But if you shoot video with electronic stabilisation the image is cropped again and it will give an angle of view similar to that of a 24mm lens. So if video is important to you and you want an angle of view given by a 20mm lens then you either get a lens that doesn’t suffer from as much distortion or you get a wider lens  – somewhere around 16-18mm.

So in real terms how bad is the distortion? Well comparing the Tamron, which is a very modern design to the Olympus OM Zuiko 21mm f3.5 released in 1984 and the Canon EF 20mm f2.8 USM from 1992 we can see that the Tamron has considerably worse distortion. This is very surprising as the two older lenses are retrofocus designs. SLRs have a big flippy flappy mirror between the lens and the film/sensor and this meant in the early days of SLR photography making wide angle lenses impossible  because the rear lens element would foul the mirror. The breakthrough came  in 1950 when Pierre Angénieux invented the retrofocus lens which is a  kind of “reverse” telephoto design where the lens elements closest to the film plane have a negative effect making the image smaller. The downsides are more glass elements which means more air to glass surfaces which means more refraction which means more potential chromatic aberration and distortion. So the fact that the Canon and Olympus lenses have a better performance with their compromised design is saying something.

In terms of lateral chromatic aberration the Tamron 20mm shows mild CA in the corners and edges which is very slight when uncorrected and virtually invisible when the profile is applied. Wide open there is longitudinal chromatic aberration present – cyan and magenta fringing on the out of focus edges – but this is easily fixed by stopping down. Vignetting is quite apparent without the lens profile, but when it is applied it is a non issue.

When it comes to flare resistance, well extreme wide angles lenses are very prone to the effects of flare and don’t necessarily have to have a specular light source in the frame to cause it. The Tamron handles it reasonably well but is prone to veiling and ghosting flare. The lens comes with a lens hood and it would be wise to use all the time and it does a reasonably good job of reducing the incidence of flare. The seven aperture blades produce sunstars or diffraction spikes that are a bit messy and not very pleasant – although this is a matter of personal taste.

The bokeh balls aren’t very attractive, they have a very pronounced onion ring effect and even the balls at the centre of the image have a slightly elliptical shape and this gets more apparent towards the edge of the image. While you don’t necessarily buy a 20mm lens for its bokeh it is important on this lens because of its close focusing capabilities. When we look at real world examples we can see the tonal transitions in the out of focus areas are nice and smooth.

Sharpness. Wide open at the centre the lens is a little soft and lacking contrast. Things improve as you stop down and the best sharpness is attained at f5.6. At the edges at f2.8 the corners are slightly worse than the centre. It is not until f8 when the corner performance equals that of the centre.

For stills photography the Tamron 20mm is very positive in acquiring focus if just a bit slow. There’s no hesitancy and no hunting. In a sequence of shots of me walking backwards and forwards the camera and lens combo achieved an 88% hit rate. I would expect that to be better with the third and fourth generation A7 bodies.

Video is a different story. There is some hesitancy in focusing and a bit of wobble even with static shots. Performance is at its best at closer distances.

For landscape and architectural work this would be quite a nice choice, particularly if you are travelling and want to keep the weight of your kit down. The fact that the lens doesn’t reach peak optical performance across the frame until f8 would not be a problem. Just remember to keep for your verticals vertical when shooting buildings.

The close up capabilities of this lens are what sets it apart from other extreme wide angle lenses. This lens will reproduce an object at half size at its minimum focusing distance of 11cm. Now remember that that distance isn’t measured from the front lens element but from the sensor plane. This means to achieve the magnification ratio of 1:2 you have to be very very close to your subject. So close that you may have to remove the lens hood as it casts shadow over your subject. I bought the lens for nature photography, particularly close ups of flowers. Wide angle close up shots allow you to show the detail of the subject and its context. That gives a more unusual look to the more standard viewpoint of a short telephoto macro lens such as 100mm. For this the Tamron works very well.

Astro – I don’t do this type of photography but from what I’ve read I think that you’d be better off getting one of the faster 20mm lenses from Sony or Sigma. F2.8 is borderline too slow an aperture and the lack of edge sharpness at wide apertures further handicaps the lens for this particular usage.

Video usage. This is where the lens is like the curate’s egg – “good in parts”. The autofocus is a bit of a let down and the manual focusing makes repeatable focus pulls difficult. The light weight is a boon for gimbal usage as is the fact that the lens doesn’t extend when focusing. If vlogging is your thing then the angle of view is just about perfect – giving your viewers more of the background rather than just having a large talking head – plus the light weight means the lens and camera combo is easier to hold at arms length. 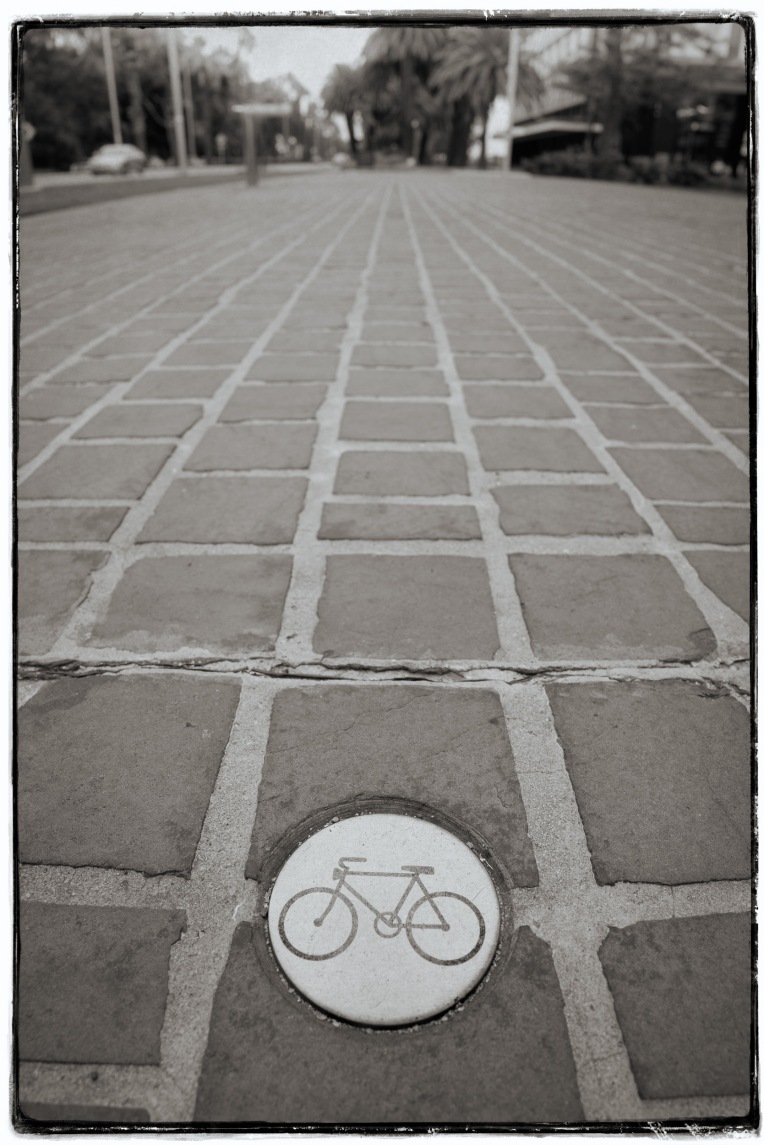 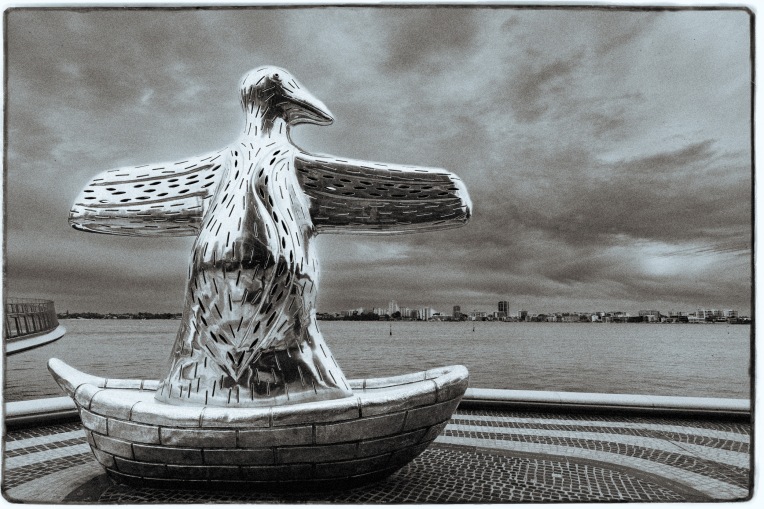 I bought this lens to compliment the 35mm f2.8 which I really like and use a lot. I find that the 20mm is somewhat underwhelming. I feel that the optical performance isn’t as good as it could be. The lens distortion is quite severe and the lens profile just blurs the detail in the corners. Couple this with the autofocus performance and I’m left feeling that it would be better to save more money and buy a better lens. In fact if it wasn’t for the close focusing capabilities I would be parting company with this lens.