… it’s a bit like fishing. There’s always the one that got away. It doesn’t matter how prepared you think you are the opportunity presents and disappears in a nano second. One of my photography lecturers used to talk about what he called ‘the retrospective drive home’ where you analyse everything you did and didn’t do that contrived to create that missed opportunity. The frustrating thing is as you try and tell someone about it they invariably say “A photograph or it didn’t happen”.  Well this time I’ve got the photos to prove it! Sort of.

The other day I was walking along the Swan River foreshore at Claremont when I saw an Osprey drop like a stone from the air and scoop up a fish.  In less than the blink of an eye it was over. I was ready the camera was out of the bag and had a long lens fitted, it was switched on and the settings were optimised. So what did I get?

With some Photoshop magic this is what I got. 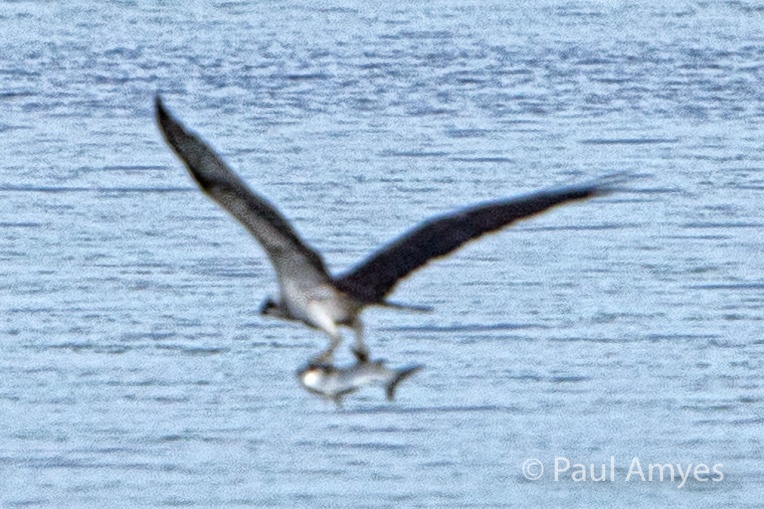 That was the best I could get – pathetic isn’t it? There I am with (hang on the other half may read this) an untold amount of money tied up in photo equipment and this is it! I remember watching the original Bladerunner where they had a fancy doodad that could extract a useable photo out of some ridiculous enlargement. You know that film was set in 2019 and it is now 2018 and we haven’t got that fancy photo doodad let alone flying cars. The future is such a disappointment. So as I walk away from the scene looking dismally at the LCD on the back of the camera I’m mentally kicking my backside.

Half an hour later I hear a commotion coming from the water. A shoal of fishing flapping on the surface coming on to the shoreline. Low and behold a fin and then a head break the surface. It’s a pair of bottle nosed dolphins driving fish into the shore. With the relaxes of a dead cat I leap into action and fire off a burst.

Well this time I got a sharp photo of something recognisable as a dolphin. But that is the best I got. This wildlife photography lark is hard – the wildlife aren’t giving me chance.