As always click on the images to see them larger.

As I said above this lens was introduced back in 1999 and it was well received by reviewers and users alike. In fact it cemented Sigma’s reputation for producing excellent macro lenses. One of my photography lecturers reckoned that this was one of the best lenses he’d used so I bought the lens new in 2003 to use with my then Canon EOS 3 and 30 and it remained in regular use until 2016. I’ve used it for macro, product shots, still life, portraits, fine art reproduction and copywork and of course close ups of flowers.

The lens was designed with film use in mind and was made available in the following mounts:

Pick up the lens and it feels very well made. It is light by modern standards but it has a nice heft to it. The lens barrel is metal – none of your plastic composites here – and the lens mount is a chrome plated brass affair. The front lens element is recessed 25mm into the lens barrel and it is ribbed to prevent reflections and acts as shallow lens hood. Combine it with the included metal lens hood and it is virtually impossible  to induce flare. The lens hood screws firmly into place on the lens’ front filter thread and is threaded to take 77mm filters which is a neat idea as it makes it possible to quickly attach filters without having to take the lens hood off.

The finish is the peculiar matt black finish that Sigma had for all their EX range of lenses with a gold ring at the end of the focus ring and the text done in a mixture of white and gold. The focusing ring is 35mm wide and has ribbed rubber to aid grip. In autofocus mode the ring spins freely, but pull that ring back and flip the AF switch and it has a nice smooth 270º throw taking you from infinity to 31cm. The lens barrel extends as you focus closer by 50mm and there are magnification scales marked on the barrel extension for both manual and auto focusing. This means you can quickly set the lens to a desired magnification ratio. It is to my mind still one of the best implementations of manual focus on an autofocus macro lens. The lens motor makes quite a bit of noise and it can’t be called quick by any stretch of the imagination, however, macro lenses are not noted for their speed of use.

Behind the focusing ring is a clear panel over a focusing scale in both feet and metres. There are two switches on the right side of the lens. The first is a focus limiter which speeds up auto focus by preventing the lens racking back and forth through the whole focus range. The second switch is the previously mentioned focus mode switch. Both are very positive in their action.

Announced in September 2020 the DG DN is available in Sony FE and Panasonic/Leica/Sigma L mounts. It is part of Sigma’s Art series and so shares the same gloss black finish with understated white graphics and lettering. No 1990’s gold bling here, just a minimalist workman like appearance. The body is a combination of metal and Sigma’s Thermally Stable Composite a kind of plastic with thermal expansion properties the same as aluminium. There are a number of ribbed panels to facilitate a secure grip. It’s great to see that Sigma has not abandoned the chrome plated brass  lens mount – it’s a proven method and lasts a long time. Pick the lens up and the first thing you notice is the weight. It is very heavy for its size. The 17 lens elements really make their presence felt when compared to the EX’s 10.

So weight and appearance aside how else does the DG DN differ from its distant ancestor the EX? Well the DG DN is 40mm longer, but it is important to remember that it is made for mirrorless cameras with a shorter lens flange distance than DSLRs. Put a Sigma MC-11 on the EX and they are virtually the same length. Another difference is that the new DG DN focuses internally – there’s no extending barrel and this will help with the weather sealing. The large ribbed focusing ring is of the fly-by-wire type, there’s no pulling it back to engage a manual focus mechanism. Consequently there are no hard stops and you get no feedback as you focus other than the image in the EVF or on the back panel. Macro photography is an area where you do use manual focus a lot and using it on the DG DN is not a very pleasant or positive experience to my mind.

There are a lot more controls on the newer lens:-

So let’s have a quick gander at the specs for both lenses. 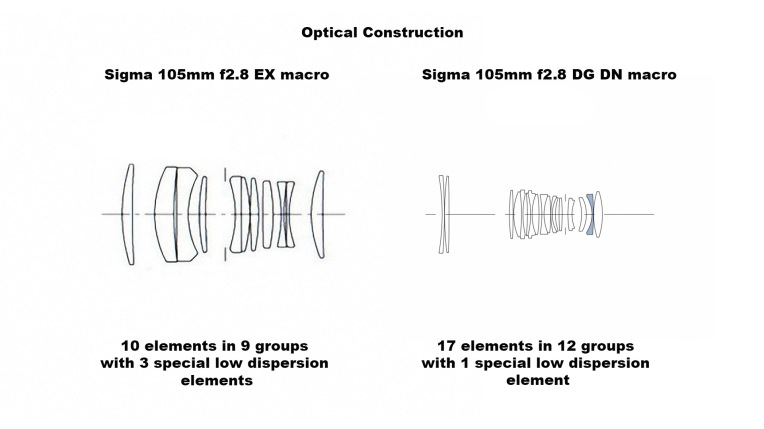 This is where we really start to what has changed in terms of lens design over the years. Wide open at f2.8 the DGDN is sharper and more contrasty in the centre of the frame. The corners are sharp but the contrast is lower. The EX on the other hand is softer and has less contrast in the centre and the corners are not only softer but display prominent chromatic aberration and have a warm tinted vignetting. Older Sigma lenses were known for having a warmer look than other brands and it is clearly visible.

At f8 the DGDN really hits its stride and produces its best optical performance with both the centre and the corners having excellent sharpness and contrast. The EX has reached its best centre performance but it is still not as good as its younger sibling. The corners have improved slightly but vignetting is still present.

At the aperture of f11 the DGDN’s performance remains the same as it was at f8 in both the centre and the corners of the frame. The EX now turns in its best performance but some vignetting remains.

At f16 diffraction is taking effect on both lenses. Interestingly the EX will stop down to f45 but you wouldn’t want to use it as it looks like someone has smeared vaseline over the front lens element.

Chromatic aberration is the failure of a lens to focus all colours at the same point and there are two types:-

The EX despite having that recessed front element that acts as a de facto lens hood suffers badly from halation, veiling flare, and reflections when specular light sources were in the frame. The DGDN has better lens coatings which means that the halation and reflected glare is minimal and there is no halation. This means that there’s little loss of contrast. 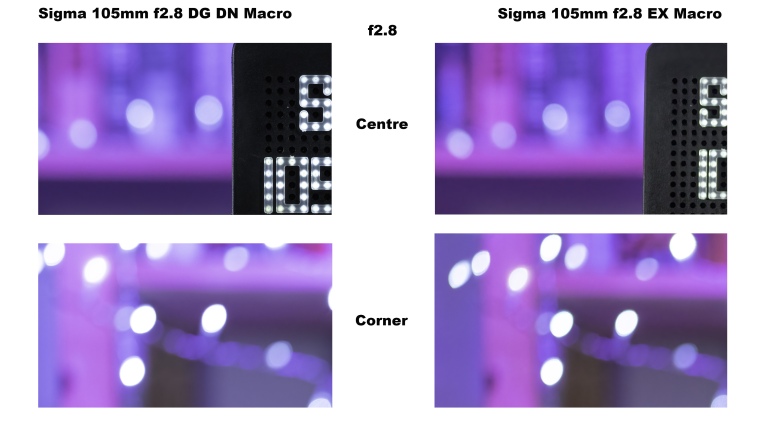 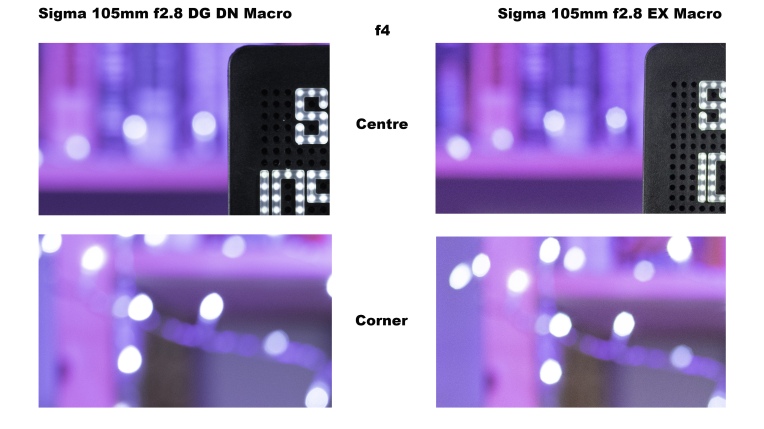 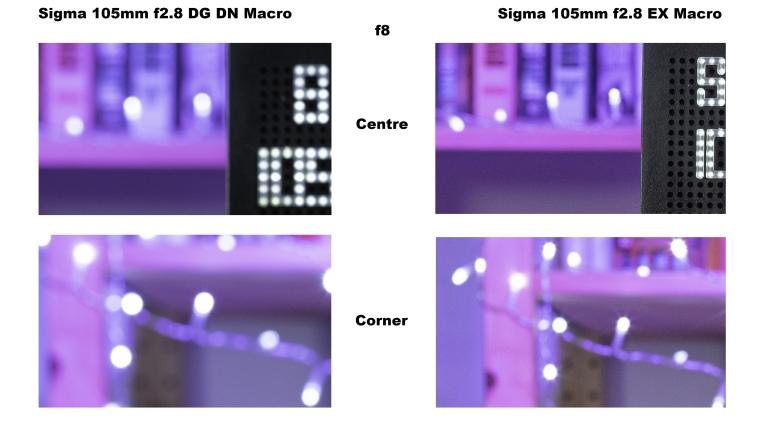 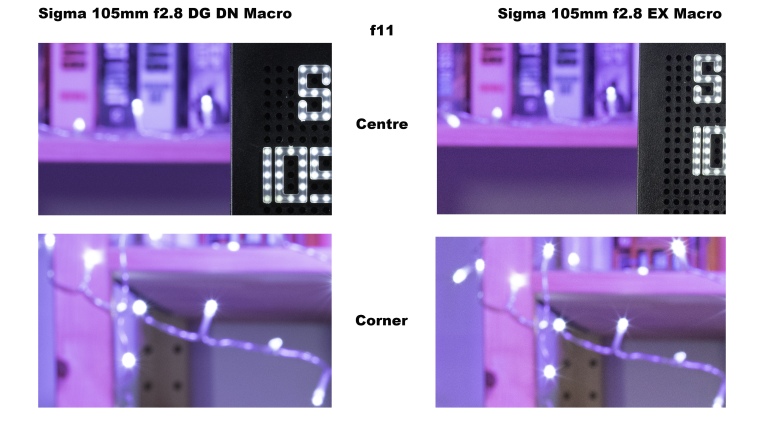 Both lenses at f2.8 have nice round bokeh balls in the centre of the frame and at the edges exhibit that elliptical cats eye effect. The tonal transitions are nice and smooth, there is no busyness or swirly effect. At f4 the EX is starting to develop polygonal balls while those of the DGDN are still nice and round. At f11 the bokeh balls in the corners of the DGDN are starting to develop into sun stars and the effect on the EX is more profound. The 9 rounded aperture blades are producing much more pleasing bokeh effects than the 8 straight ones of the EX.

Autofocus is where there has been an enormous improvement in performance over the last 22 years. The EX when mounted on the Sony A7r ii with either the Metabones V Smart Adapter or the Sigma MC-11 just won’t autofocus. When you switch the camera on the lens racks through its entire focus range (depending on where the limiter is set) and then does nothing. So to test the AF performance I had to mount it on a Canon EOS6d which wasn’t known for its blistering AF speed. I shot several sequences with the focus limiter on at f2.8 of me walking slowly towards the camera with it set Continuous AF and obtained a nit rate of between 70-75%. Video AF was a non starter and it just would not find focus. To be fair the CAF of the 6d in video mode is pretty lacklustre. With the DGDN mounted on the Sony A7r ii the stills burst rate for AF averaged out at 94% which is pretty impressive. The DGDN handled the video AF test with aplomb, it was smooth and positive keeping up with me moving about in the frame. The AF was noisy and was picked up by the shotgun microphone mounted in the camera hot-shoe. Speaking of noise the EX was incredibly noisy.

This should really come as no surprise, time has marched on and the advances in lens design are easily apparent.The Sigma 105mm f2.8 EX macro was considered a very good lens in its day, and even now it is remembered fondly on photographic forums. The DGDN is just at another level of performance both in terms of optics and auto focusing. The EX while being optically suited to a number of tasks its AF performance let it down when it came to anything that moved quickly or erratically. The DGDN on the other hand can be confidently used as a general purpose short telephoto with a wide variety of subjects as well as being a dedicated macro lens. The only area in which the EX is superior to the DGDN is in the handling department. The manual focusing experience and the ability to pre-set specific magnification ratios makes the lens a joy to use manually. The DGDN is clearly aimed at the autofocus only photographer. A great shame.

So if you have a Sony FE or one of the  offerings from the “L mount alliance” then the lens is worth a look at. Well it is your only option in L mount. It is also a worthy competitor to the Sony 90mm f2.8 FE macro OSS G at a cheaper price.